The Rose City of Jordan

Journey through antiquity with this fascinating and enthralling adventure in the south of Jordan. Travel to Petra is an unforgettable experience that should be near the top of every traveller’s bucket list. Discover the ancient civilization of the Nabataeans, a nomadic Arab community dating back to the 2nd century.

Who Were the Nabataeans?

Nabataeans were travellers and traders who saw great opportunity to increase their wealth in Petra due to the location’s proximity to trade routes. They sought to establish Petra as a trading hub, and were able to successfully do so, amassing considerable revenue and then reinvesting in Petra.

The secret to the Nabataeans ability to thrive was their familiarity with living in the barren deserts, which gave them a distinct advantage over their enemies by using the terrain to great advantage in defending the capital.

These Ancient Arab people were particularly skilful in harvesting rainwater, agriculture, and stone carving. As a result, Petra flourished in the 1st century AD, when its famous Al-Khazneh Treasury structure – believed to be the mausoleum of Nabataean king Aretas IV – was constructed. At that time, the population peaked at an estimated 20,000 inhabitants.

A Brief History of Petra

Carved into the red-hued sandstone, the prehistoric Rose City is a living museum, switching hands several times over thousands of years. At first Nabataeans ruled the area, then it fell into the hands of the Romans, before Crusaders and Muslims would each stake their claim. By the 7th century, the community was deserted. However, the nearly 1000 caves of Petra have since drawn local Bedouin tribes. Now, visitors from around the world travel to Petra to marvel at the sites. 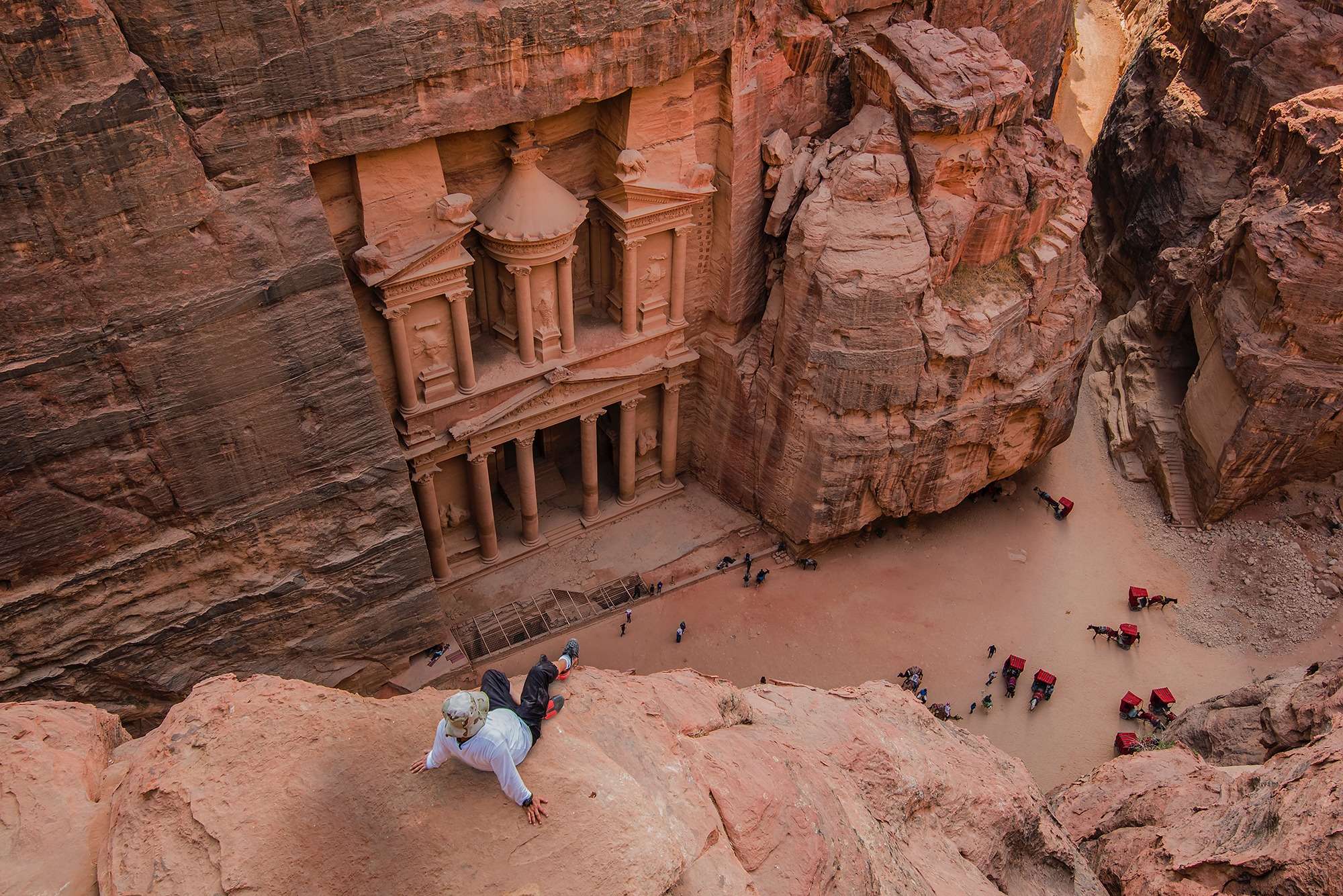 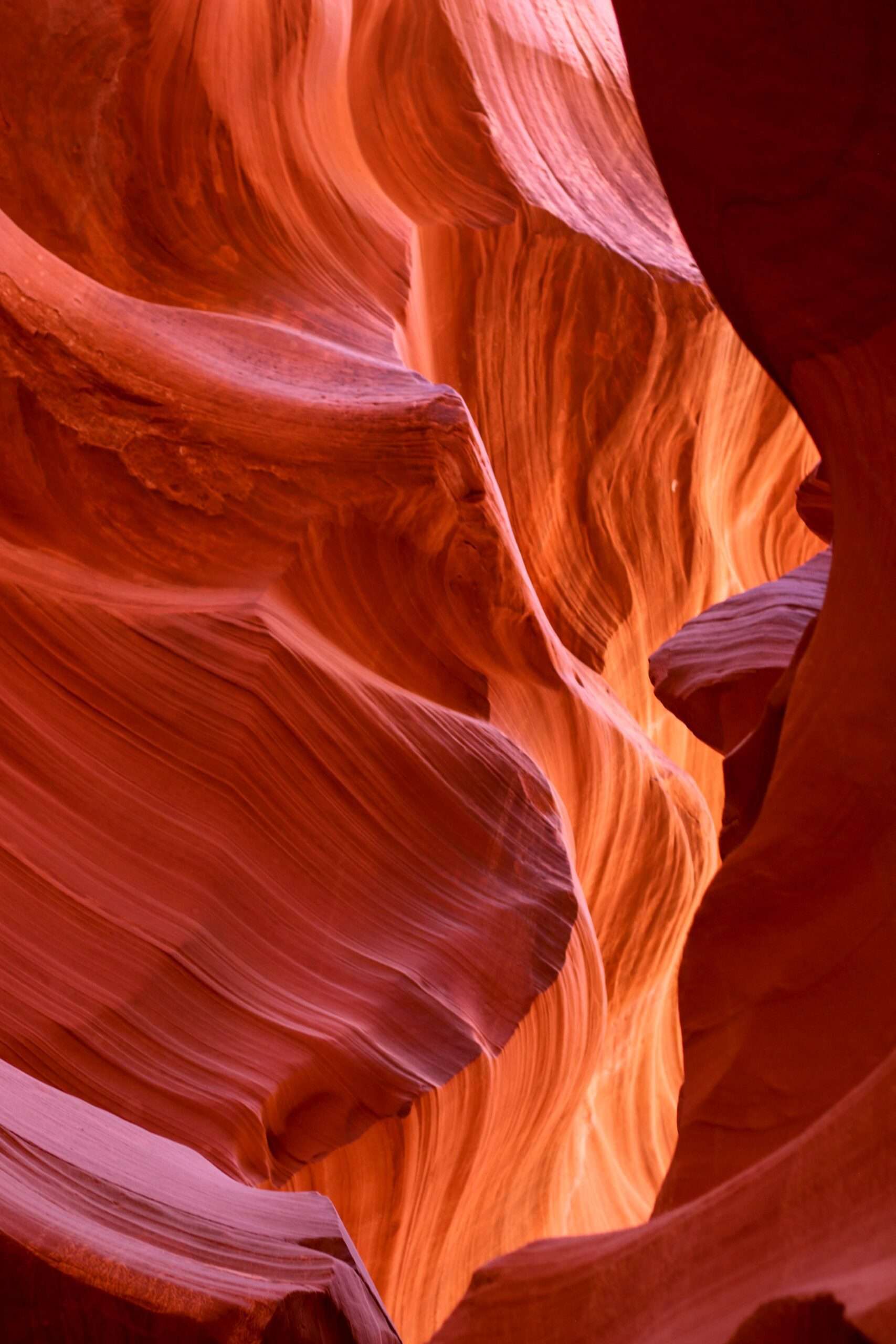 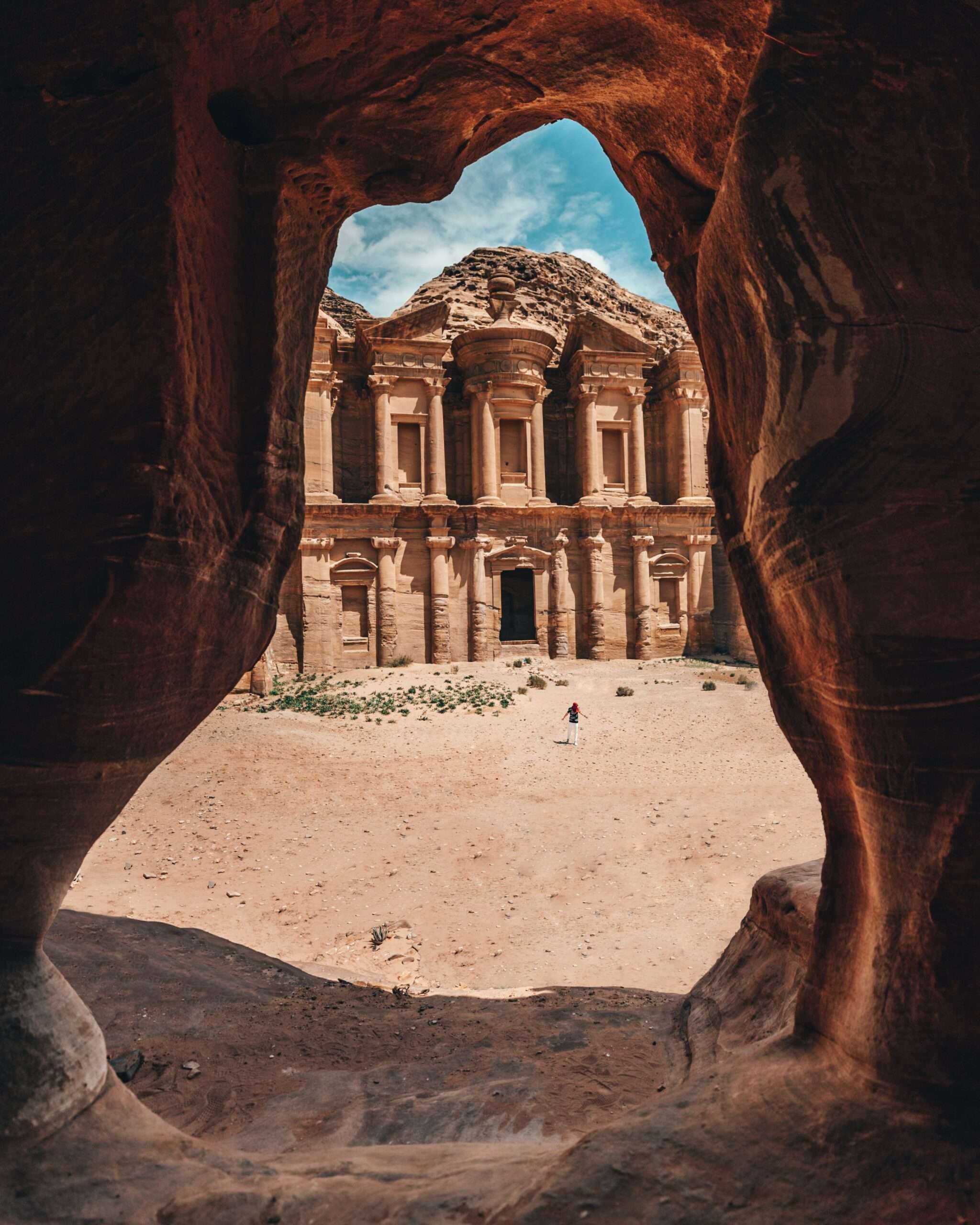 How to Travel to Petra

• Fly into Amman Airport
• Rent a car and drive 4 hours
• Tickets available only at the visitors centre in Wadi Musa
• Cost: 90 Jordanian Dollars / 50JD overnight
• Many hotels offer free shuttles to and from the main gate

When to Visit Petra

Unsurprisingly, Petra can get extremely hot. During the peak of summer temperatures can hit a highs over 35°C.

Spring: March – May
Autumn: September – November
Travel to Petra during these months will allow you to enjoy much more comfortable temperatures of 18-25C. 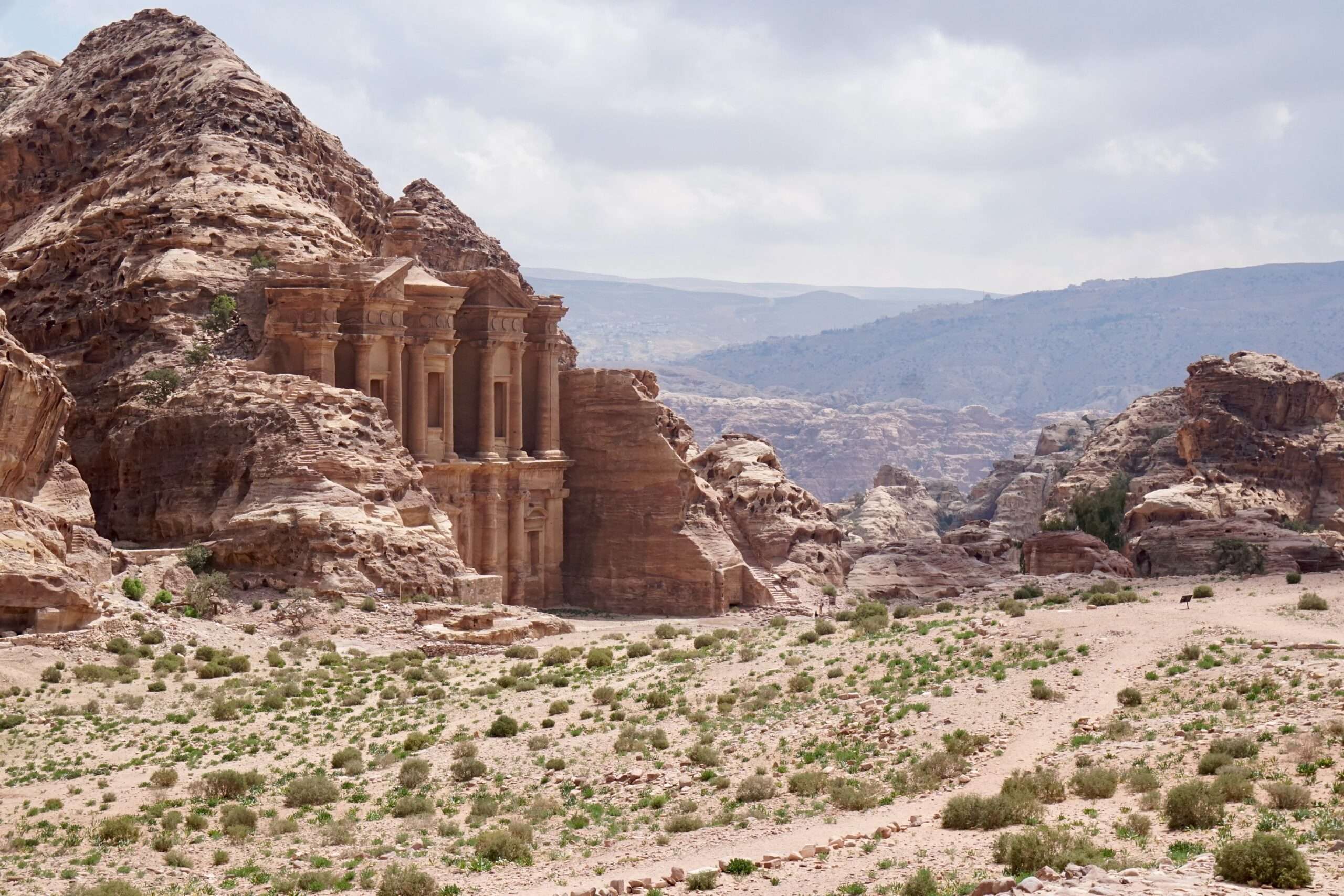 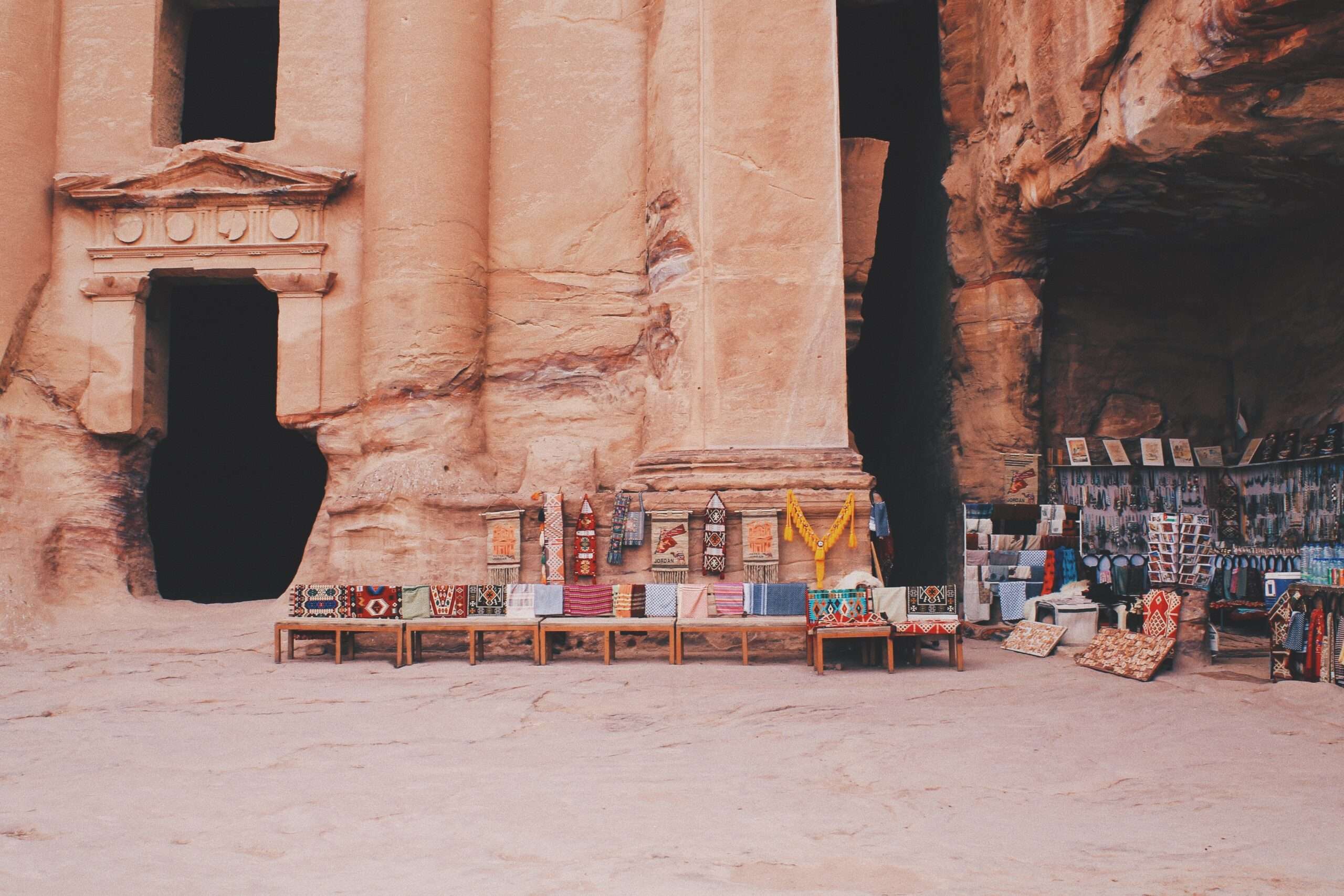 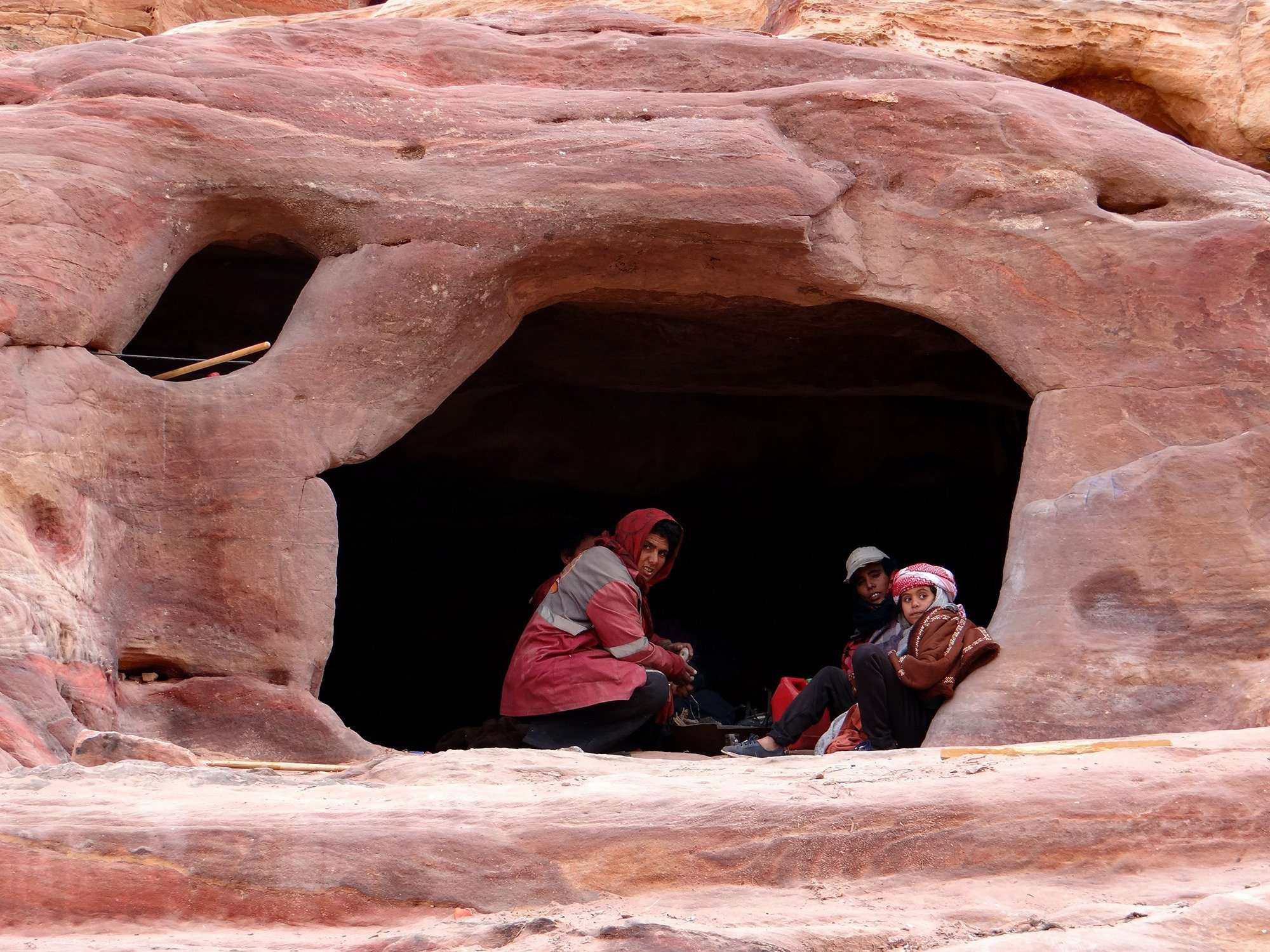 The best way to explore Petra is on foot, therefore you’ll need to pack a pair of comfortable and lightweight boots. Petra’s impressive site extends well beyond the main structures to include a theatre, caves, monuments and much more. Hiking trails will take you up and down, and across great distances offering spectacular views over the city. Because of this it’s quite possible to walk well over 6kms and spend the entire day exploring, so come prepared. 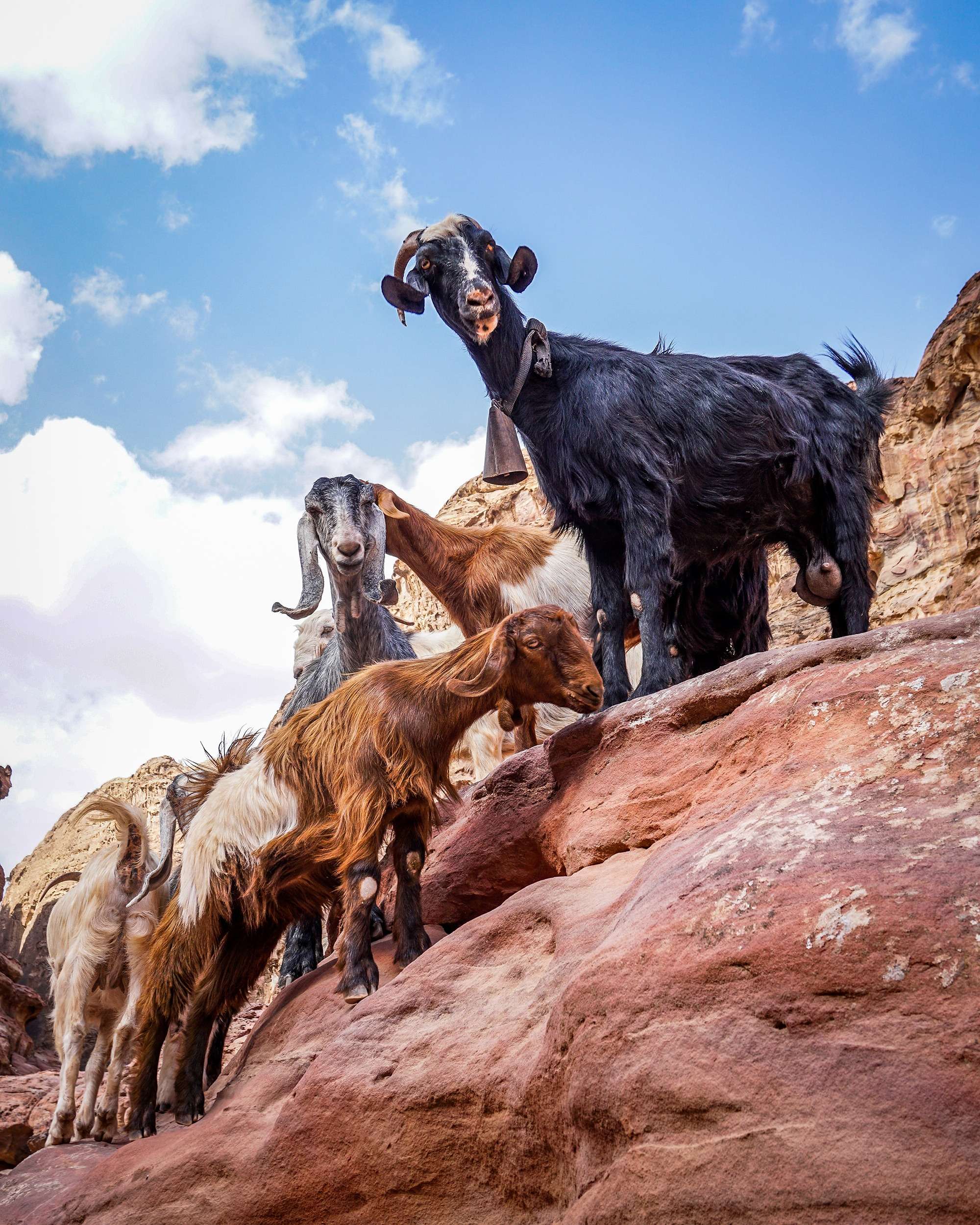 To make the most of any travel experience you have to meet the locals, and Petra is no different. The Bedouin people are warm and engaging. By purchasing something nice to bring home, you’ll help support the local families and community that rely heavily on tourism to get by. Interestingly they are experts at bartering, so expect to do a little negotiating. Have fun, ask questions and get to know more about their way of life. It’s also common to be invited to share a cup of tea or a meal at home with a local family. If you have time, we highly recommend you do. We can’t think of a better way to experience Petra. 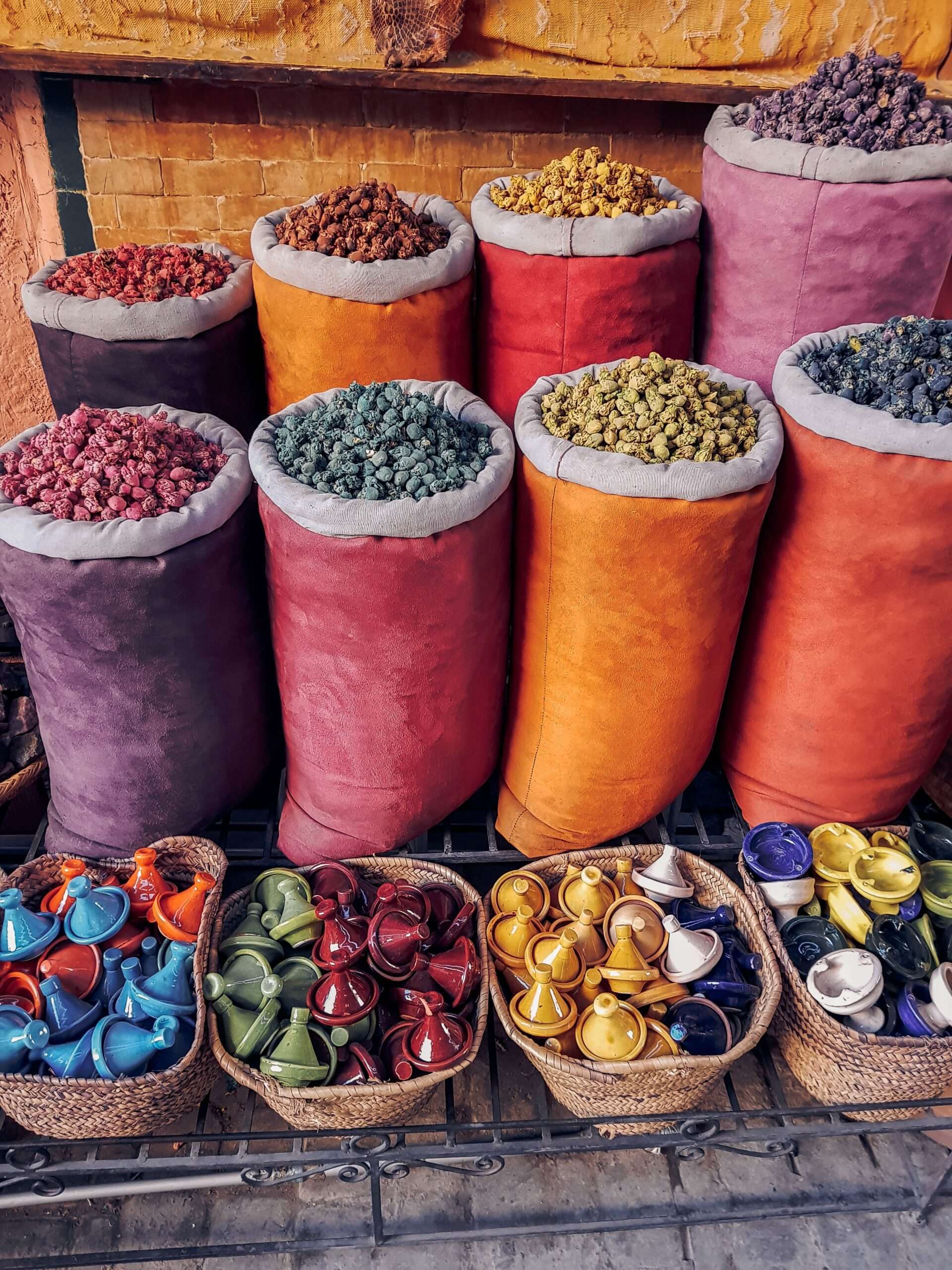 Visit The Markets in Marrakech, Morocco 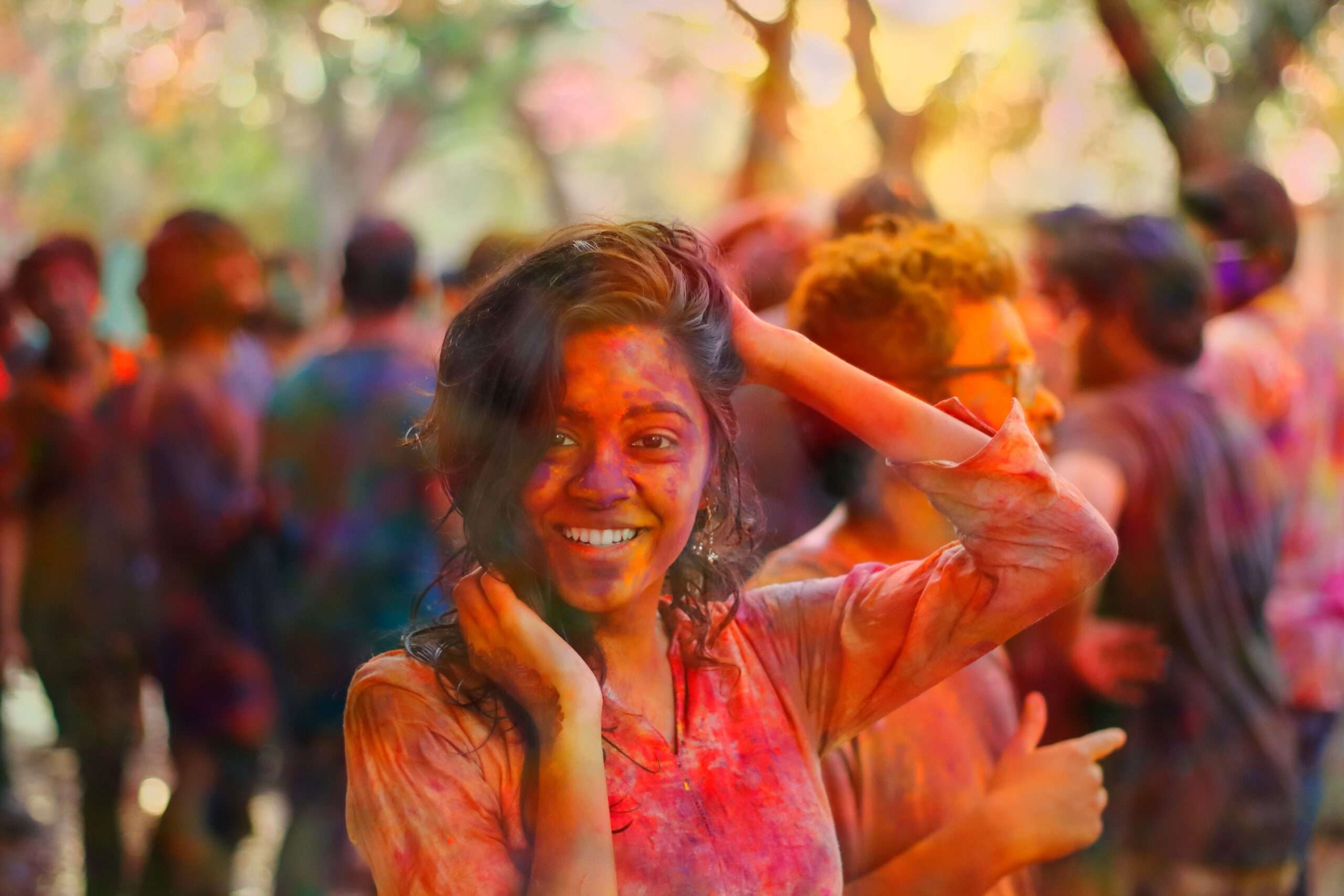 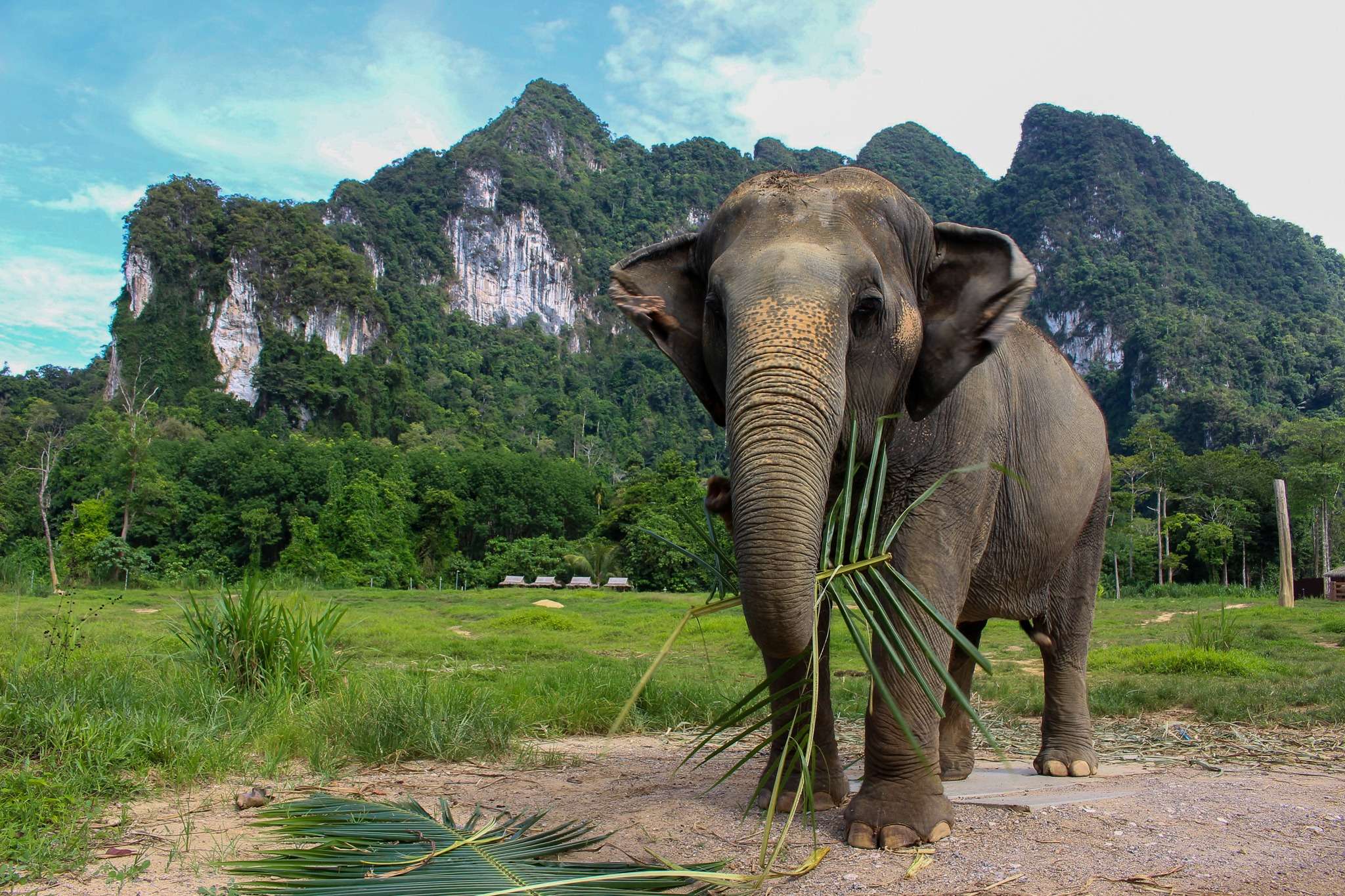 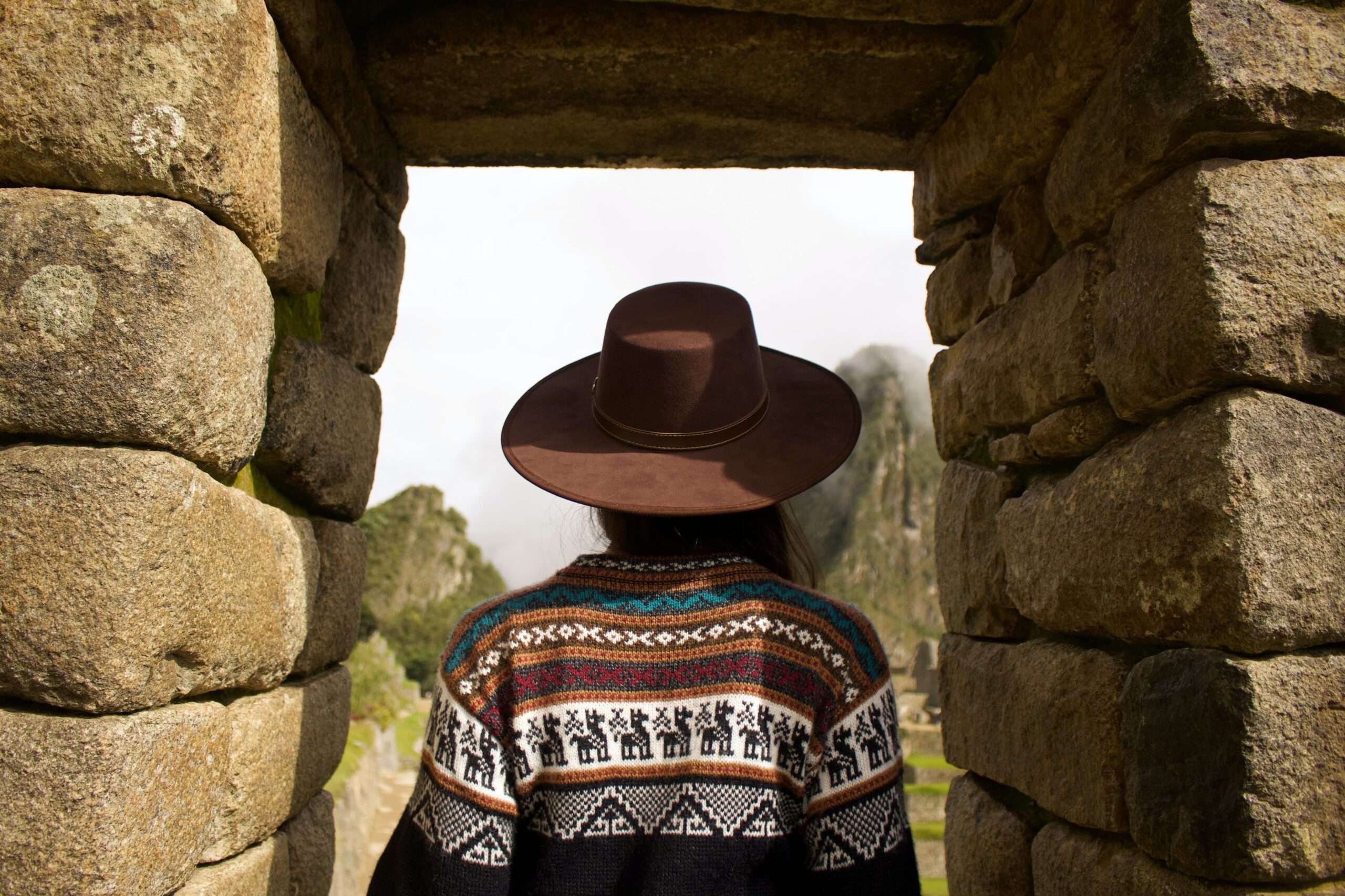